The quintet places Bach, Vivaldi, Mozart and their peers in a fresh new context, forging links with the sounds and lifestyle of the present day. Classical at heart, outwardly wilful, inquisitive and nonconformist, the five musicians pitch their tent on the open ground between classical works, minimal music, electro and avant-garde. With enthusiasm and abandon, styles are mixed and a galaxy of sonic options is explored – given that their well-stocked arsenal of instruments offers over 40 different recorders, violin, viola, violoncello, melodica and piano. No one piece is like the next, and yet they all bear the original, unmistakable fingerprints of this exciting ensemble.

An ECHO Klassik Award winner in 2011, the ten-year-old grouping has played its way into the vanguard of the young creative classical scene. The quintet is now well established at the world’s biggest venues and festivals – whether in chamber performances or in a solo role with orchestra. The group is cherished by its fans above all for its thrilling, highly energetic live performances, which see the five talented musicians getting physical on stage with ebullient vitality and the pulsating power of a rock band. Together they present music that ignites passion. Together they spark.

Dubbed “chamber music for the Facebook generation” by heavyweight weekly DIE ZEIT, the Spark sound catches the zeitgeist with its rapid cuts and intuitive shuffling and sharing of different eras and genres. This opens up classical music to a younger audience. Ballet music by the young Mozart is juxtaposed with modern techno sounds, Handel motifs are sequenced, the final movement of a Vivaldi concerto is replaced by Dutch minimal music, Couperin is turned into a slow-motion ambient collage, Mendelssohn gets a face-lift in avant-garde folk-tinged tones. Nothing is there for the sake of being there or added out of sheer striving for effect. These are craftsmen who work with precision and expertise, while adding that indispensable dash of joyful experimentation. This is classical music for the here and now, played by musicians who embody their own message. “These artists preserve all the complexity of the classics,” writes the Süddeutsche Zeitung, “they simply change the context and demonstrate their belief that pop music is just as much part of our cultural heritage as the classical tradition.” The French newspaper L’Alsace writes: “Five musicians are at work here who in essence are great performers and compelling artists. They have such total command of their instruments that they can carry the day in any music style you can name, without limiting themselves to any specific genre.” DIE WELT calls Spark a “top-notch band” and the Dutch newspaper de Volkskrant places Spark among the few ensembles “that have the potential to convincingly combine influences from pop and dance with classical music.” The American Record Guide sees Spark as “a genuine classical music phenomenon not unlike Yo Yo Ma or the Kronos Quartet, but even more vital.”

Alongside clever arrangements of classical masterworks, Spark focuses on contemporary music, working with a string of internationally recognized composers. Such leading lights as Johannes Motschmann, Chiel Meijering, Kenji Bunch, Kamran Ince, Roger Wanamo, Jonne Valtonen, Lev Ljova Zhurbin and Sebastian Bartmann have created works specially tailored to Spark, written to do justice to the broad sound spectrum and consummate virtuosity of the group. Totally diverse in their concept of sound, these compositions are united by their essentially tonal disposition and the internalization of utterly different musical styles. The result is a fascinating sound world that remains accessible to a wide audience while at the same time reflecting a thoroughly modern look and feel. The band’s own compositions broaden the range of the ensemble and promote the status of its five musicians. They see themselves not as mere exponents of an already finished work but as artists who profile themselves on all levels as creative and inventive individuals. They represent a new sense of identity within a young generation of classical musicians who are redefining their approach to the classical tradition.

Many notable concert venues have hosted Spark, among them Wiener Musikverein, Konzerthaus Berlin, Kölner Philharmonie, Alte Oper Frankfurt, Munich’s Gasteig, the Philharmonie in Essen, Concertgebouw Amsterdam, London’s Barbican Centre, Gran Teatre del Liceu Barcelona, the Flagey in Brussels, the National Concert Hall of Taipei, the Shanghai Oriental Art Center, the Schleswig-Holstein Music Festival, the Rheingau Music Festival, the MDR Summer of Music, the Mosel Music Festival, the European Weeks in Passau, the Handel Festivals in Göttingen and Halle, the Dutch classical open-air festival Wonderfeel, the Belgian Festival Musiq'3 and La Folle Journée in Nantes, Tokyo and Warsaw. For some years now, the quintet has also been performing regularly as a solo group with orchestras, playing premieres of works specially written for Spark and orchestra. The ensemble has given concerts with the London Symphony Orchestra, WDR Funkhausorchester Köln, Frankfurter Opern- und Museumsorchester, the Residentie Orkest in The Hague, Nederlands Kamerorkest, Württembergisches Kammerorchester, Folkwang Kammerorchester and Südwestdeutsches Kammerorchester. The conductors with whom Spark has performed include Wayne Marshall, Sebastian Weigle, Hans Leenders, Ruben Gazarian, Peter Tilling, Timo Handschuh, Mark Mast, Markus Huber and Johannes Klumpp. Outside of the traditional classical environment and among colleagues from other branches of music, Spark’s radical new approach to classical music has aroused great interest. Beatboxer and Supertalent finalist Robeat contributed feisty beats to the Spark number Harde Puntjes. Jazz singer Kitty Hoff let Spark’s sounds underpin her rendition of the folk song Ich hab die Nacht geträumet. And Berlin DJ Emanuel Satie put out Spark’s Candybox in a compelling remix. So it is no surprise that the Classical Band is a welcome guest in jazz clubs, at rock and pop festivals and on alternative platforms – like the Reeperbahn Festival in Hamburg, Stuttgart’s Theaterhaus, Tollhaus Karlsruhe, the Ulmer Zelt, E-Werk Erlangen, Café Hahn in Koblenz, Kulturufer Friedrichshafen and in Berlin’s wickedly famous techno club Berghain. Whenever time permits, Spark can be found in schools and youth centres too, notably in association with the Rhapsody in School project. The classical music consumer of tomorrow is a figure the group aims to get to know and understand today.

September 2010 marked the release of the Classical Band’s debut album, Downtown Illusions, which captured the urban melting-pot in an intoxicating sound experience. MusikWoche called the album “one of the year’s biggest surprises” while Audiophile Audition spoke of a “radically new face for chamber music and classical in general.” The album grew into an indie hit, rising to Number 1 in Amazon Germany’s classical charts. 2011 saw Spark awarded an ECHO Klassik Award for Downtown Illusions in the category “classics without borders”. The very next year, the group again wowed the trade press with their second album, Folk Tunes, by radically updating European folk songs for modern times. “Traditional folk turbocharged” concluded Rondo magazine, and rbb Kulturradio was emphatic: “Spark is brilliant in any and all genres; its musicality is breathtaking.” On their third album, Wild Territories of 2015, the Classical Band set contemporary accents and presented brand new works from Germany, the Netherlands, Turkey and the USA. NDR called the record’s raw eclectic mix a “shower of pure energy” and Fono Forum described the five musicians’ technical ability as “simply phenomenal”. Their next release from the summer of 2017, Facets of Infinity, lined up Spark in the work of the same name by Berlin composer Johannes Motschmann as solo quintet with the Frankfurter Opern- und Museumsorchester under the direction of Sebastian Weigle. The Frankfurter Rundschau described the piece as “a feat of musicianship, filled with glowing colour and a physical presence clear as a bell“ and Klassiek Central spoke of “an overwhelming waterfall of sounds and colours“. The band’s fifth album, On the Dancefloor, followed in the summer of 2018, extending to its audience an invitation to the dance – from the Mozart minuet to chamber techno. The disc gave the group a remarkable follow-up to the overwhelming success of their very first recording. On the Dancefloor won a nomination for the German Record Critics’ Prize and received a euphoric reception across the media. “This is pure joie de vivre! Their imaginative madness, infectious love of making music and brilliant virtuosity are irresistible.“ – was the verdict of BR Klassik. The Berlin daily Der Tagesspiegel was particularly enthusiastic about a cover version of the ABBA hit Dancing Queen: “The pulse is as powerful as in the original, while the song’s sound spectrum is far broader, coming across like a Beethoven or Brahms quintet.“ The studio albums of the band are complemented by various live recordings for radio and TV, notably by German stations ARD, ZDF, 3sat, SWR, NDR, WDR, HR, BR, rbb, Deutschlandradio and Radio Bremen, and by Radio 4 Nederland, NPO Nederland, Radio Classique, Radio Musiq'3 and NHK Tokyo.

Remarkably, Spark highlights a thoroughly controversial instrument: the recorder. The group’s founding members Daniel Koschitzki and Andrea Ritter, both winners of first prizes at major international solo competitions in London and Montreal, play the instrument with such verve that the “kiddie tooter” stereotype is blown away and sent into orbit with their very first notes. “Seldom have we heard recorders as rhythmical, as expressive, as frenzied as this,” enthused the Südwestpresse about the two flute players. They are ably supported by violinist Stefan Balazsovics, cellist Victor Plumettaz and pianist Christian Fritz – three brilliant partners who share their desire for new forms of expression and give a face to Spark’s vision. Together, these five young artists conquer the stage with a motley crew of instruments ranging from the 10-inch sopranino recorder to the two-metre-tall subbass, from the classical piano trio to the exotic timbres of modern keyed flutes, a melodica and a slide whistle, plus spontaneous vocals. That is Spark’s way of reinventing itself from one piece to the next. Surprise is the key. Listeners around the world respond to this skilful blend of tradition and trends, and they like Spark’s message: Good music knows no boundaries! 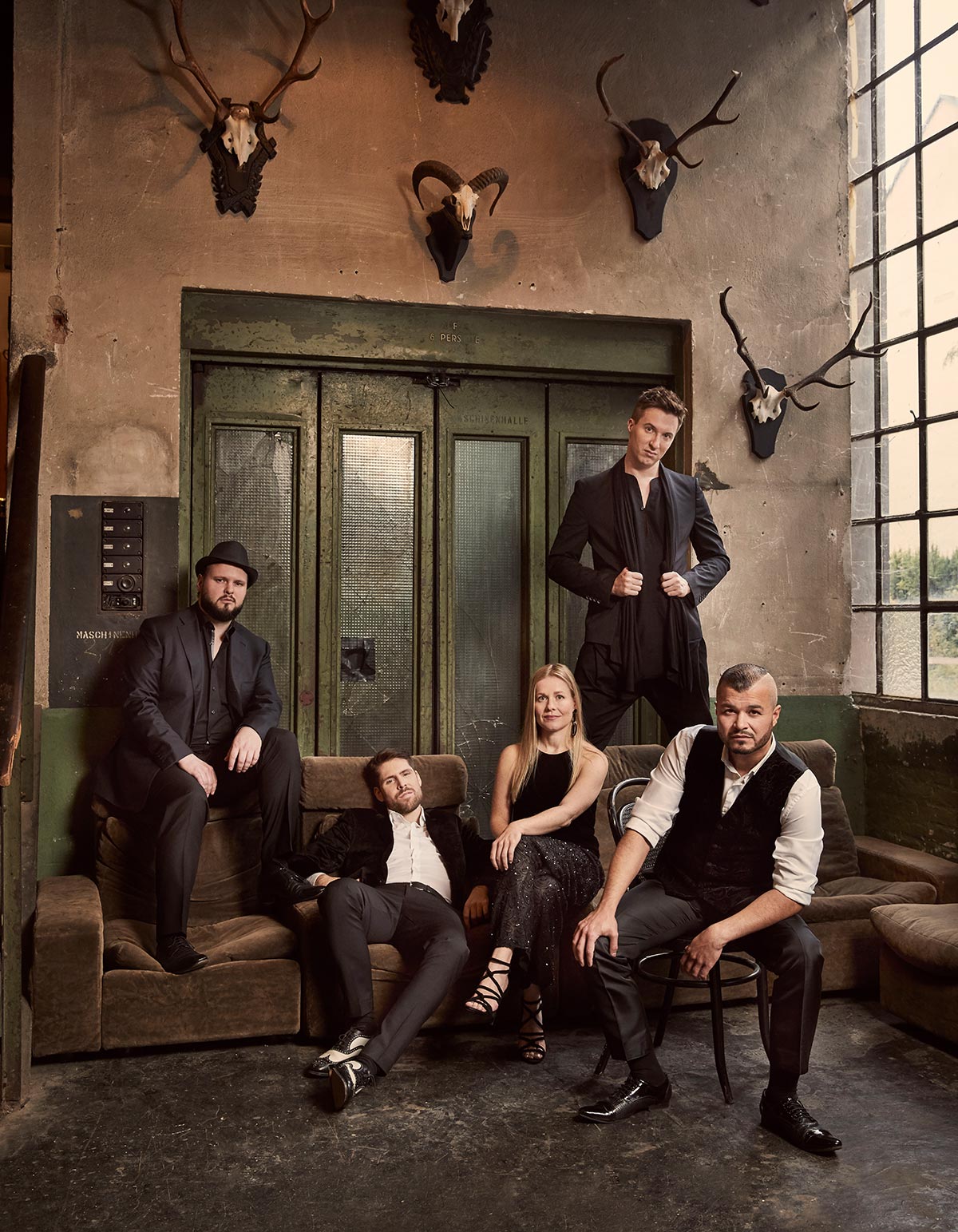